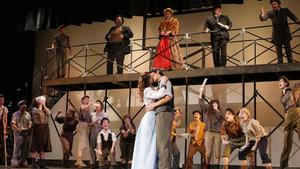 The RGV premiere of the new musical, Newsies, was originally performed by McAllen High School in January of this year. The show was nominated for eleven Palm Awards at the Rio Grande Valley High School Theatre Awards known as The Palms. It won five awards--Best Lighting Design, Best Choreography, Best Actor, Best Ensemble and Best Musical.

The show is being performed two more times for the Rio Grande Valley community. Performances will be held on Friday, May 24th at 7:30 p.m. and Saturday, May 25th at 2:30 p.m. Both shows will be at McAllen High School auditorium (2021 La Vista Ave.).

Tickets can be purchased online at Eventbrite.com https://www.eventbrite.com/o/mcallen-high-school-20088380173?fbclid=IwAR1JTgEjMb5-yCUUhQG7BPMH3dUVLd9aJ1L-tHYy5KHIalX9dYMsSkxhxD0. Proceeds from the ticket sales will help fund scholarships for McHi Theatre students pursuing the arts in college.

“We’re immensely proud of the show these students put together. We are humbled beyond belief by the support and positive reception to the show. We decided to put together the revival performances because the students wanted to do it again, members of our community were asking for it and also, I’d love to watch the show again, too.”

“I have never done anything in my life that has awarded me more, or that has been as much of a blessing, than being a part our McHi Production of Newsies. It was an absolute honor for us to be involved in such an amazing show that had a very compelling story, beautiful music, and outstanding choreography and it is dream come true to relive the fun all over again.”

Set in turn-of-the century New York City, Newsies is the rousing tale of Jack Kelly, a charismatic newsboy and leader of a band of teenaged "newsies." When titans of publishing raise distribution prices at the newsboys’ expense, Jack rallies newsies from across the city to strike against the unfair conditions and fight for what's right!

Based on the 1992 motion picture and inspired by a true story, Newsies features a Tony Award-winning score by Alan Menken (Little Shop of Horrors, Sister Act) and Jack Feldman and a book by Tony Award winner Harvey Fierstein (Kinky Boots). Featuring the now classic songs “Carrying the Banner,” “Seize the Day,” and “Santa Fe,” Newsies is packed with non-stop thrills and a timeless message, perfect for the whole family and every audience.
Print