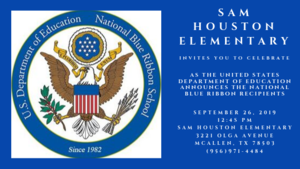 U.S. Secretary of Education Betsy DeVos recognized 362 schools as National Blue Ribbon Schools for 2019, in an announcement made today, September 26.

Only 26 schools in Texas were nominated for the prestigious Blue Ribbon.

Houston was nominated as an Exemplary High-Performing School in January and it became official with today’s announcement.

"This is like winning the Super Bowl, the World Series,” McAllen ISD School Board President Marco Suarez said. “This is a big win for the kids, for the teachers but, most importantly, for the community members who have invested a lot of time. This is what happens when we work together.”

“It’s a testament to the hard work that our staff is putting in here and our student body,” McAllen ISD Superintendent J.A. Gonzalez, Ed.D., said. “Ms. Thomas (principal) does a phenomenal job leading this campus and this is just a culmination of all that hard work.”

“It shows that you are amongst the best in the nation,” Sam Houston Principal Debra Thomas said. “I am so honored to be the principal here at Sam Houston Elementary because I have teachers that have such a strong drive and determination to make sure each and every one of our students succeed. I have teachers that work tirelessly for hours on end to ensure that they are planned, prepared and determined to bring the best education for our students.”

The recognition is based on a school’s overall academic performance or progress in closing achievement gaps among student subgroups.

“We recognize and honor your important work in preparing students for successful careers and meaningful lives,” DeVos said in a video message to the honorees. “As a National Blue Ribbon School, your school demonstrates what is possible when committed educators hold all students and staff to high standards and create vibrant, innovative cultures of teaching and learning.”

Now in its 37th year, the National Blue Ribbon Schools Program has bestowed recognition on more than 9,000 schools. On November 14 and 15, the Secretary and the Department of Education will celebrate with 312 public and 50 non-public school honorees at an awards ceremony in Washington, D.C.

The Department recognizes all schools in one of two performance categories, based on all student scores, student subgroup scores, and graduation rates:

Up to 420 schools may be nominated each year. The Department invites National Blue Ribbon School nominations from the top education official in all states, the District of Columbia, Puerto Rico, the Virgin Islands, the Department of Defense Education Activity, and the Bureau of Indian Education. Private schools are nominated by The Council for American Private Education (CAPE).

Photographs and brief descriptions of the 2019 National Blue Ribbon Schools are available at https://www.ed.gov/nationalblueribbonschools.