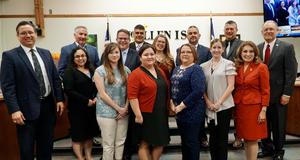 For the fourth straight year, the State has recognized McAllen ISD’s School Business Office for its financial transparency.

McAllen ISD has won several major awards in recent years for its sound fiscal practices. These include:

The Certificate of Achievement in Excellence in Financial Reporting by Government Finance Officers Association of the United States and Canada (GFOA) for its comprehensive annual financial report (CAFR) for the ninth consecutive year. The Certificate of Achievement is the highest form of recognition in governmental accounting and financial reporting and its attainment represents a significant accomplishment by a government and its management.

Earning the state’s highest mark by TEA’s Schools FIRST (Financial Integrity Rating System of Texas), 16 times in 17 years with a perfect score in the last eight years.
Earning the Meritorious Budget Award (MBA) for excellence in budget presentation for three straight years. This is the highest award in government budgeting. The recognition was made by the Association of School Business Officials International (ASBO).
Maintaining a high credit rating from a major credit-rating service (Moody’s)
Earning Achievement of Excellence in Procurement (AEP) for six straight years from the National Procurement Institute, Inc.