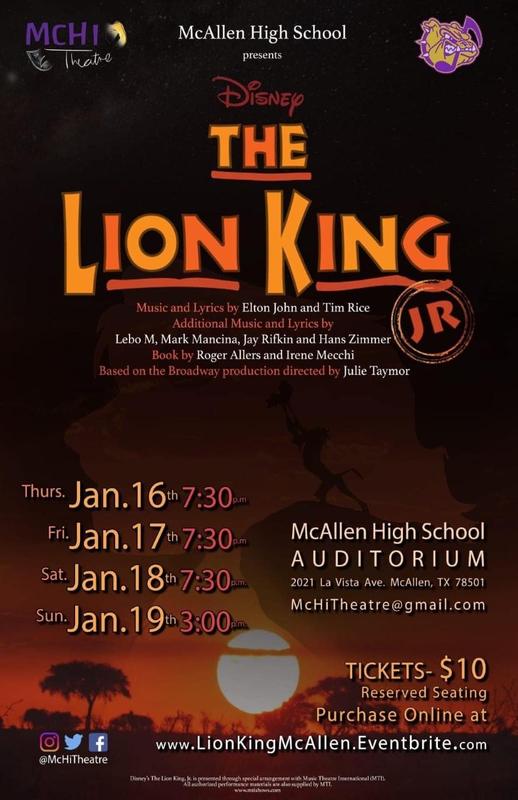 The McAllen High School Theatre and Choir are proud to present Disney’s The Lion King in January. The musical is based on the Broadway production directed by Julie Taymor and the 1994 Disney film.

This production will feature more than 40 amazing McHi students. The Lion King tells the story of the epic adventures of a curious cub named Simba as he struggles to accept the responsibilities of adulthood and his destiny as king. Along the way, the young lion encounters a colorful cast of characters, including spunky lioness Nala, charismatic meerkat Timon, and loveable warthog Pumbaa. To claim his rightful place on the throne and save his beloved Pridelands, Simba must find his inner strength and confront his wicked Uncle Scar. The Lion King features classic songs from the 1994 film, such as “Hakuna Matata” and the Academy Award®-winning “Can You Feel the Love Tonight,” as well as additional songs penned for the Broadway production.

“We are thrilled to be staging the epic story of The Lion King,” McAllen High Theatre Director Jason Barrera said. “Aside from the iconic songs and lovable characters, what drew us to this particular show was the potential to tell the story in a reimagined style. The evocative dance choreography and detailed stage effects enhance the emotional impact of the music. I don't think it'll look like any other Lion King you've ever seen before.”

Performances will be at the McAllen High Auditorium at 2021 La Vista Avenue in McAllen.

“This is a large jump from last year’s musical, Newsies,” McHi Theatre’s Student President, Alejandra Tamez, said. “Newsies was really fun and energetic, whereas The Lion King is more of an artistic show. It requires more technique, grace, and getting out of your comfort zone to create beautiful visuals. McHi’s adaptation of The Lion King will be something different. There is a great deal of dedication and sacrifice being put into this production that is really amazing to see.  It is not an easy process but it’s a challenge that the students are taking head on.”

All tickets are $10 and can be purchased online at https://www.eventbrite.com/o/mcallen-high-school-theatre-28255762429?fbclid=IwAR3i01VEKxz8DkpL0OwvXweukxkiFRAktrFD-wKw3WwoaM1I1cSpSv1TqDw.

“Art has the role in education of helping children become like themselves instead of more like everyone else,” Barrera said. “Make plans to watch these talented students express themselves.”