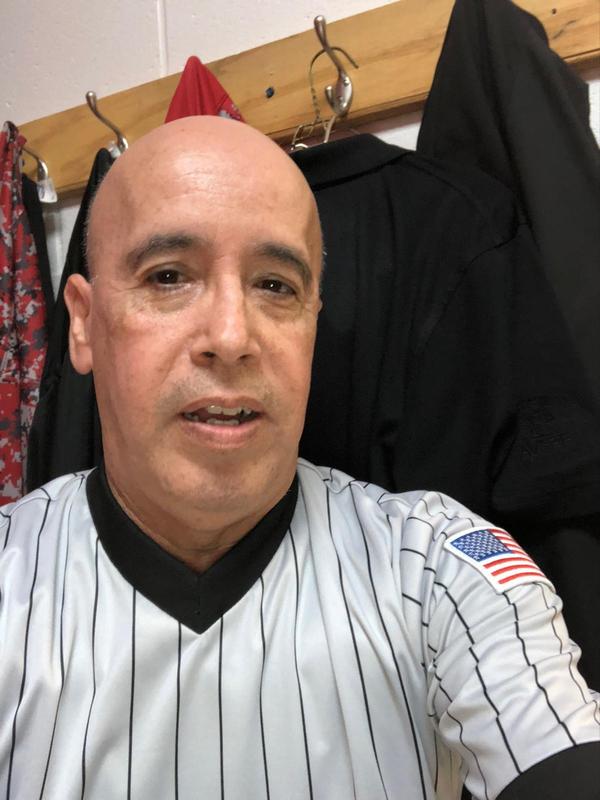 There would be no star players or hall of fame athletes without officials. There would be no close games or championships of any kind. It wouldn’t happen without those committed to enforcing the rules and making sure every player abides by them.

One of the best, Mario Reyna, is on the cusp of being inducted into the Rio Grande Valley Sports Hall of Fame for his decades of dedication to the craft of officiating.

In addition, he has dedicated 38 years to the children of McAllen Independent School District. He spent 22 years as an elementary physical education teacher and the last 18 years as the district’s Health and PE Coordinator.

The RGV Sports Hall of Fame induction ceremony is scheduled for June 20 although the date could change due to the COVID-19 health crisis. Of the seven inductees into this year’s class, three are from McAllen ISD. Reyna will be joined by McAllen High Volleyball Coach Paula Dodge and McAllen Memorial Athletic Coordinator and Head Football Coach Bill Littleton.

Over the years, he has umpired baseball and officiated volleyball and basketball. By his estimate, he has called more than 2,000 high school games and 200 college baseball games.

“I guess I’ve done okay as a sports official,” Reyna said while laughing. “I would not have survived 42 years.”

Always modest, Reyna may be the only official in the Rio Grande Valley that has officiated UIL state championships in three different sports and one TAPPS (Texas Association of Private and Parochial Schools) state championship game.

He umpired college games for 12 years including games involving players that went on to play in the major leagues. He stepped away from baseball after a 100 mile-per-hour fastball hit him right above the heart. Due to the anxiety of possibly being hit again - he stopped umpiring. It didn’t stop him from climbing the tower to officiate volleyball matches or running up and down the court for hoops.

He officiated his first game when he was just 16. It was a Mustang League baseball game featuring nine and 10-year old kids. His awareness of officials had begun around that time as a high school basketball player.

“I learned very quickly that we can’t have any games without officials,” Reyna said. “When I played basketball, I realized how important they were. I tried to figure out the referees really quickly, like if they’d allow me to do certain things or not allow certain things I could get away with.”

Which sport is the most difficult to call?

“Basketball is tough because you are constantly moving and things happen fast with 10 players moving all over the place,” he said.

After four decades, he holds many fond memories.

“Being voted in by former coaches and players that are members of the RGV Sports Hall of Fame means more because, over the years, when you call so many games, you’re going to come up with conflict,” Reyna said. “It is part of the game and never personal. There are many kids that I officiated and now they’re coaches.”

He takes prides when former players and coaches talk about fond memories in games and not about any of his calls which they might have liked or not liked.

“When you leave a game and people talk about the game and they don’t talk about a call that could have gone either way, that feels good,” Reyna said. “I can go into almost any gym in the Valley and I’ll recall playoff games and several players from back in the day.”

Even after 42 years, he keeps sharp through books on rules and mechanics. He believes officials owe it to everyone to give their best effort.

“Today it doesn’t matter to the coaches, players or fans what I’ve accomplished,” he said. “I have to prove myself in every single game and it does not matter the level. Frankly, you are as good as your last call. That’s just something that has stayed with me. I also tell my co-officials nobody comes to games to see us. Because we’re going to make the calls, angry fans are fans and that’s just part of the game. I carry on that philosophy of emotional intelligence and of the self-awareness component.”

He takes a philosophical approach to his craft.

“I’m aware people are going to boo you; players and coaches are going to disagree with calls because they want to win the game,” he added.

For officials, a victory means a smooth game in which afterward, everyone reflects on the spectacle and not the officiating.

His accomplishments with McAllen ISD have earned national recognition for the school district.

This includes all eligible campuses being listed among America’s Healthiest Schools every year since 2014.

“The (Alliance for a Healthier Generation, a national program) awards program allows us to have accountability because we have to provide documentation on criteria in different modules (Policy & Environment, Nutrition Services, Smart Snacks, Health and Physical Education, Physical Activity, and Employee Wellness),” he explained. “I am proud that McAllen ISD is the only school district in the nation (our size) that has all their schools earning the award for six consecutive years.”

Reyna has served in leadership positions of local sports’ officials associations in baseball, basketball, and volleyball. He became the TAHPERD (Texas Association of Health, Physical Education, Recreation and Dance) Administrator of the Year in 2015. That was followed by induction into the Society of Health and Physical Educators (SHAPE America) Hall of Fame in 2016. TAHPERD honored him again in 2019 with the David K. Brace Award -- the highest award bestowed on a member.

He has impacted thousands of kids and young adults through PE and officiating.

“Physical education is a vital part of the education field because of the focus on the total development of the child,” he said. “It is not only about mental development but also about social, emotional and health/physical development. With the unfortunate coronavirus where our students are mandated to ‘shelter at home,’ I think parents and the community are valuing how important exercise is for everyone.”

Staying out of the public eye is the mark of a good official. Ironically, that is just what puts him in the spotlight for the RGV Sports Hall of Fame.