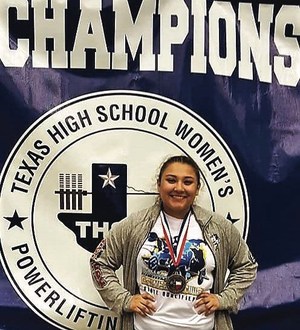 Imagine trying out a sport you’ve never heard of because someone said you might be good at it.

Then, a few months later, you actually qualify for the state’s top competition in that sport and end up placing fourth among dozens of competitors. That’s exactly what happened to McAllen Memorial’s Itzayanni Martinez in 2017. And this year, she was good enough to win it all taking home the gold medal at the 2018 Texas High School Women’s Powerlifting Association state meet March 16 in Waco.

“I gave wrestling a try, but I learned that it just wasn’t something for me,” Martinez, a senior, said. “Winning state this year has been my goal since last year when I earned fourth place. I knew I was able to get first, so I strived and worked hard for it. My hard work paid off.”

Indeed, it did. And not just for her. The THSWPA state meet (powerlifting is not a UIL sport) was dominated by Rio Grande Valley girls. They won nine of the 12 competitive divisions at the meet including a victory by McAllen High’s Isabella Contreras, who took gold in the 148-pound category by lifting a total of 1,105 pounds.

Many of the powerlifters have been working on their craft for years. For Martinez, Memorial’s team captain, success obviously came through a different route. Memorial powerlifting coach Joe Guerra said once Martinez started working hard and found her niche, she became a very aggressive lifter – and that helped her to win all seven of her meets this year and set records at the regional and state meets.

In Waco, Martinez broke the squat and bench state records for the 198-pound division, and she also set a new record for total pounds. Two years ago, she may have gone in a different direction and never seen the inside of a weight room if not for Guerra.

“Honestly, I never even knew about powerlifting. I was actually trying out for a different sport (wrestling) when Coach Guerra scouted me,” Martinez said. “He wanted me to try out. So I did, and when we were maxing out we were both surprised with what my numbers were. He was so excited and so was I. My lifts were amazing for being my first time.”

Clearly, Martinez took it from there. With gold medal in hand and lots of fresh enthusiasm, Martinez said she plans to go to college and continue to lift. She’s not set on where yet, but said the requirement is that the school has a weightlifting club.

“It’s my sport and this isn’t the end for me,” Martinez said. “It’s just a start to a great beginning after high school, therefore, I’m off to set new goals.”