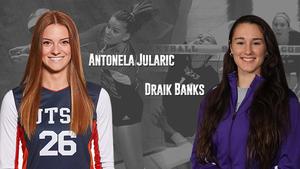 "I could not be more excited about adding Draik and Antonela to the roster, Lowery said. "We have depth at every single position and the competition their additions will bring to our gym day in and day out is going to drive us to a new level. I'm ready to get back from summer and start training with this group. We have a great blend of new talent and veteran leadership that is going to go a long way in the fall."

Originally from McAllen, Banks was a two-sport star at McAllen Memorial, competing in both volleyball and basketball. Banks earned Rio Grande Valley All-Star and Offensive Player of the Year honors as a senior by averaging 2.7 kills on .312 hitting in 84 sets. She was also recognized as the MVP Blocker of the Year with 60 total blocks (19 solo). Banks led her team to State Championship Semifinals appearances during each of her last two seasons, with records of 35-8 as a senior and 33-10 as a junior. Banks earned the Coaches' Choice award as a junior. She was also the ROTC Iron Woman of the Year as a freshman and a two-time honorable mention in basketball. In the classroom, Banks was an Honor Roll student, a member of the National Honor Society, and represented McAllen on a holiday float as an outstanding female athlete.

"Draik is extremely competitive and will add great depth in the middle for us," Lowery said. "She is extremely focused and her dedication and discipline have paid off. She has matured so much as a volleyball player over the last couple of years. We are really excited to see her back in the Valley and look forward to her contributing in the fall."

Jularic posted six double-doubles as a sophomore and had a match against Charlotte in which she hit a career-best .351 (17-4-37). Off the court, Jularic earned Conference USA Commissioner's Honor Roll recognition.

Some of her most memorable moments came as freshman, when Jularic came up with the match-winning kill to lead UTSA to a victory over No. 12 Oregon, and when she recorded her first double-double with 14 kills and 12 digs in an upset of Clemson.

Originally from Zagreb, Croatia, Jularic played her club volleyball for HAOK Mladost. She has competed with the Croatian Youth and Senior National Teams, including at the 2015 Youth World Championships. She was also named the Best Athlete in her hometown of Vrbovec in 2010.

"Antonela is a complete player capable of being a very good six-rotation outside," Lowery said. "We have watched her over the past three years and think, with her experience and athleticism, she will give us the option of either a 5-1 or 6-2 offense as she gives us another attacker on the pin."
http://goutrgv.com/news/2018/6/18/volleyball-adds-pair-of-division-i-transfers-for-2018.aspx Source: UTRGV
Print