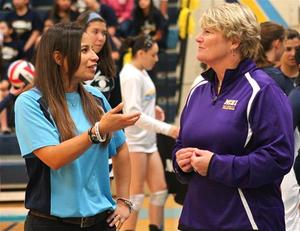 McALLEN – A life mantra for McAllen Memorial volleyball coach Lorena Lopez is to “live and enjoy the moment.”
Those moments as the Mustangs volleyball coach are winding down. Lopez, who has walked the Memorial court sidelines since being hired as the freshman coach just a few months after graduating from the University of Texas-Pan American (now UT – Rio Grande Valley) in 2001 will step down from the coaching ranks at the end of this season. She will immediately slide into the role as assistant athletic director under the guidance of school district athletic director Paula Gonzalez.

Lopez took over the reins from Iris Molina in 2001 as the freshman coach and worked her way up the ranks to coach the JV dark team and then assistant varsity coach. Molina became Lopez’s assistant coach in what was a position switch.

“She came in straight out of college and had the knowledge volleyball-wise, and as she climbed the ladder, it became clear that she would be the next one,” said Molina, who coached from 2001 through 2004. “During that time – and even now – she was always learning. She’s always on the lookout for something she can incorporate to make her team better.”

Lopez has collected 381 varsity wins along with four district titles, 12 playoff appearances and a host of other accolades, including being The Monitor’s All-Area Volleyball Coach of the Year twice. She will not reach her 400th win before she moves on, but can reach 390 – and that would mean another deep run into the playoffs.

“We think we can make the regional quarterfinals again,” said Lopez, whose team has been there three straight years. “We have a great group of girls and a strong team. I’m proud of their accomplishments.”

The Mustangs are undefeated in district and hold a two-game lead over both McAllen High and McAllen Rowe, but still have to play them one more time apiece. While the Mustangs are in the driver’s seat, anything can happen when those schools face each other, and picking a winner based on records is highly not recommended. Memorial and McHi play again at noon on Saturday at McHi. The Mustangs and Warriors are scheduled for their rematch at 5:30 p.m. on Oct. 23 at Memorial.

When Molina stepped down, Lorena came in with a team that had won five straight district titles and just watched several of the Mustangs top players graduate.

“It was a difficult first few years because we graduated a really strong senior class,” said Lopez, who is without Molina on staff this year for the first time. Molina went to Lamar Academy and teaches English. “She was my sounding board and colleague and friend so there’s a piece missing.”

Molina said that she and Lopez were “going to try and finish together.” However, life happens and Molina felt the Lamar opening was her next step.

Lopez was nearly born a coach and says she’s been “coaching forever.” Her daughter, who is 7, has been hitting a volleyball around since she was 2, so there’s more than likely another volleyball player/coach in the making. Sports are in her blood, and while most coaches are adrenaline junkies who get their fix on the sidelines (especially in Lorena’s case against rivals McAllen High and McAllen Rowe), Lopez said she will still be getting those heart-stopping moments as assistant athletic director – and probably more often than ever now that she’ll be on the sidelines cheering for all three schools.

“Believe me, I still get that adrenaline going,” Lopez said. “Now it’s watching all our teams play. I’m out there and my heart is jumping out of my chest. The first time two of our teams played each other I told Paula (Gonzalez), ‘oh my God, I want whichever team has the ball to score.'”

Her wardrobe has a little more variety in it these days. It’s not only Memorial's Columbia blue but dashes of McAllen Rowe’s dark green and (gulp) McHi purple. While Memorial’s colors have been her life for the past 17 years, she originally was a dark green clad athlete – but at Harlingen South. And Harlingen’s South rival – none other than the purple-laden San Benito Greyhounds. She also donned the dark green for the UTPA Lady Broncs.
“People are already getting a kick out of it – especially at McHi, but not so much at Memorial,” Lopez said with a laugh. “(Memorial football coach Bill) Littleton joked with me that he thought I looked great in everything, until he saw me wearing a McHi shirt.”

Cathey Middle School seventh-grade coach Jenna Trevino (then Jenna Garcia) was a junior on the Mustangs team when Lopez took over as head coach. She said a lot of what she learned from Lopez are the philosophies she uses with her Cobras team. That’s another plus for Memorial since most of the students feed into Memorial from Cathey.

“Working under her has been a dream; I’ve looked up to her since I was 14,” Trevino said. “When I played she was really quiet and very serious – you could never tell when she was upset or when she was happy.

“I cried when she broke the news to me – I took it really hard, even though I didn’t want to show emotions. She told me ‘hey, I’m not dying or leaving the district,’ but it’s still a little heartbreaking to me.”

Lopez also realizes that a lot of the relationships she’s developed professionally over the years – like the intense rivalry with coach Paula Dodge at McHi and coach Magda Canales at McAllen Rowe – will not be quite the same since they won’t be facing off against each other. However, she said the friendships she’s built will continue on.

“It was time for me to do other things, to learn new skills and get out of my comfort zone – and coaching is so my comfort zone,” she said. “I get to do something different and still be involved in athletics. I’ll be just in a different role.

“My relationships with my fellow sister schools, well it will be a change because I’m not going to be there in that same capacity. But coach Dodge and I are really good friends and that’s the same with Magda at Rowe. We are competitive out there – we want to beat each other more than anyone else but especially with Paula and we will talk about it after like it’s nothing.

“In the end, that’s a friendship that’s always going to last past any match.”