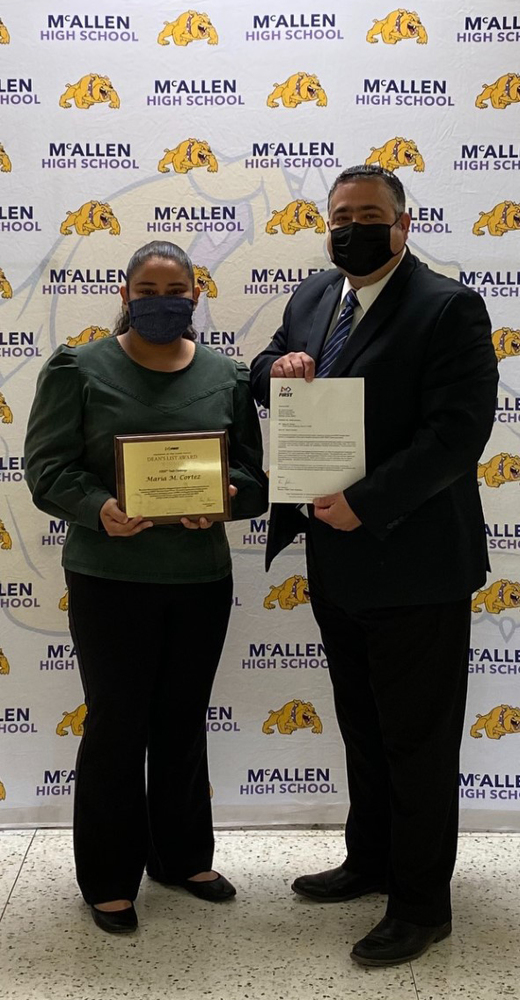 McAllen High student 1 of 10 in nation to earn award

A McAllen High student has become one of just 10 students nationwide to earn a special award.

Maria Cortez, a McAllen High senior, has earned the prestigious FIRST Dean’s List Award, it was announced recently. Cortez is active in the Robotics Program. She was chosen out of thousands of students who were nominated nationwide.

Cortez is the first Rio Grande Valley winner and is the only Texas-based student that was chosen this year.

The 2020 FIRST (For Inspiration and Recognition of Science and Technology) Dean's List Award chose their winners by their increased awareness for FIRST and its mission. They must have achieved personal technical expertise and accomplishments, exhibited great leadership abilities within their team and in their community and to have been selected for regional or district championship for qualifying events.

Her outstanding academic record and superb performance throughout her years in the McAllen ISD Robotics Program led to her selection.

She is the daughter of Enrique Cortez and Nora Lopez and was nominated by McAllen High librarian, Robotic Sponsor and Robotic Coach, Mrs. Josie Saldana.

FIRST is a robotics community that prepares young people for the future through a suite of inclusive, team-based robotics programs for ages 4-18 (PreK-12) that can be facilitated in school or in structured afterschool programs. Boosted by a global support system of volunteers, educators, and sponsors that include more than 200 of the Fortune 500 companies, teams operate under a signature set of FIRST Core Values to conduct research, fundraise, design, build and showcase their achievements during annual challenges.

In the photo, McAllen High senior Maria Cortez (left) stands with McAllen High Principal Albert Canales during a ceremony honoring Cortez April 14 at McAllen High School. She is one of just 10 students nationwide to win the FIRST Dean’s List Award.