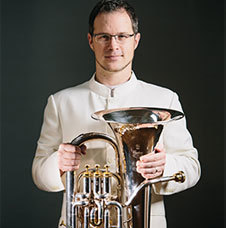 The 32nd annual Rio Grande Valley TubaChristmas Concert is set for 2 p.m. Sunday, December 12 at the McAllen Performing Arts Center (801 Convention Center Blvd.) in McAllen. This will be the first TubaChristmas in two years after the 2020 event was cancelled due to COVID-19.

This unique and entertaining Christmas music concert will be free.

Since 1989, TubaChristmas has featured several hundred tuba and euphonium players from the Rio Grande Valley and beyond. This ensemble will include members of the Rio Grande Valley Symphony Orchestra, the McAllen Symphonic Band, Valley Band Directors and the finest high school and junior high students from many RGV schools.

This year’s guest artist will be elite brass soloist Adam Frey (pictured). He has soloed with many famous orchestras including the Boston Pops Orchestra, the Harvard Pops Orchestra, Atlanta Philharmonic Orchestra and the US Army Orchestra while performing in at least 17 nations.

A native of Atlanta, Frey is Assistant Professor of Music at the University of North Georgia and is a Yamaha Performing Artist and clinician. His performance is made possible by a grant from Melhart’s Music of McAllen.

TubaChristmas is a series of nationwide concerts that runs each year between Thanksgiving and Christmas Day. Each year, there are more than 150 concerts in 46 states plus Canada and Switzerland. Performance group sizes can range from just a handful to several hundred.

It all began in 1974 when about 300 tuba and euphonium players gathered at New York City’s Rockefeller Center to honor the memory of William Bell (born Christmas Day, 1902) and to celebrate his considerable achievements as a performer and teacher. Mr. Bell was a member of John Phillip Sousa’s Band, the Goldman Band, the NBC Symphony Orchestra, New York Philharmonic and was on the faculty of the Julliard School of Music, Manhattan School of Music and University of Indiana. Arturo Toscanini, conductor of the NBC Symphony Orchestra, considered Bill Bell to be the world’s greatest tubist.