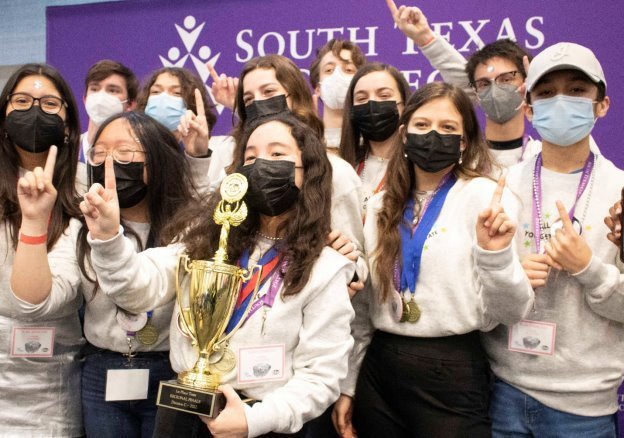 The Lamar Academy team won the High School Division C championship to qualify. Fossum finished in a first-place tie in the Middle School Division B competition, but ended up second due to a tiebreaker. Cathey took fifth and De Leon finished sixth. For the first time, all six McAllen ISD middle schools competed in the Regional Olympiad.

They will compete at the State Science Olympiad April 22-23 in College Station. The top three teams in Division C plus the top six in Division B advanced to state.

The Olympiad consists of interscholastic competitions for students in grades 6-12 centered on events in Science, Technology, Engineering and Math (STEM).

Science Olympiad is a nonprofit organization developed more than 30 years ago to improve the quality of science education for students. Hosted by the Physical Science Department at South Texas College, the event is a way to provide recognition of outstanding achievement in science education by both students and teachers from all 50 states competing at the regional, state and national level.

“The Science Olympiad has hands-on events where students build some of their projects at home and test them here,” Dr. Ludivina Avila, STC Chemistry Instructor and Regional Event Coordinator, said. “They also get the opportunity to be on a college campus and meet different instructors and students in the STEM fields from STC.”

The Olympiad includes quiz events in Anatomy and Physiology plus Rocks and Minerals. There are also hands-on events like Wright Stuff where students build and fly homemade aircraft or the Bridge event which tested each team’s ability to build a structurally efficient but strong bridge.

Events are mostly hands-on and ranged from mouse trap vehicles, to building a hydrometer for the food science event. Some events, like forensics, involve a fictionalized crime scene where students try different experiments in order to solve the case.

ABOUT SOUTH TEXAS COLLEGE
Founded in 1993, South Texas College is accredited by the Commission on Colleges of the Southern Association of Colleges and Schools and offers more than 127 degree & certificate options, including associate degrees in a variety of liberal art, social science, business, math, science, technology, advanced manufacturing and allied health fields of study. Additionally, South Texas College is the only community college in the State of Texas to offer five baccalaureate degrees. South Texas College has a faculty and staff of more than 2,700 to serve 28,000 students, on the college’s six campuses, two higher education centers, and one virtual campus.

CAPTION FOR PHOTO
Members of McAllen ISD’s Lamar Academy celebrate after they took first place in the High School Division at the 16th annual Regional Science Olympiad held Feb. 26 at STC’s Pecan Campus. The Olympiad consists of interscholastic competitions for students in grades 6-12 centered on events in Science, Technology, Engineering and Math (STEM). Lamar Academy and three other middle school teams (Fossum, Cathey and De Leon) will compete in the state competition April 22-23 in College Station.