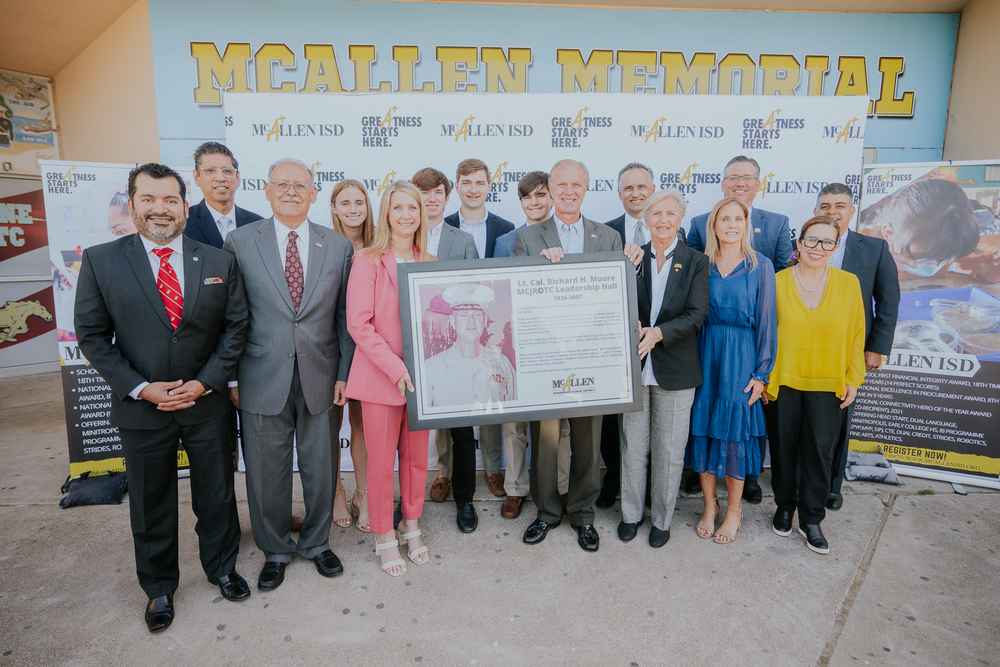 Family members, former students and other well-wishers gathered to share memories and swap stories in honor of a former instructor in McAllen Memorial High’s JROTC Program.

Lt. Col. Moore ran the program from when Memorial became a high school in 1980 until his retirement in 1991. He passed away in 2007. He was also a decorated Vietnam War veteran.

“My father was all about service and he was a career marine,” his daughter, Stephanie Moore Beck, said. “He was very dedicated to his cadets. I believe that my dad would be so honored by this whole ceremony today and that so many people think so highly of him.”

Mario Lozoya, one of his former cadets at Memorial High, chaired the Naming Committee. He spoke of the gratitude so many of Lt. Col. Moore’s former students have for him.

“They (Moore family) came at an important time in McAllen and helped in this effort of growing McAllen in the right way,” he said.

A plaque honoring him was unveiled. It reads:

Moore was born in Boston, Massachusetts in 1936. He and his family relocated to McAllen after 22 years of service in the US Marine Corps in 1980 – the same year McAllen Memorial became a high school. He served as the Senior Marine Instructor in McAllen Memorial’s JROTC Program for 11 years until a service-connected disabling disease forced him into retirement in 1991.

Through his leadership and dedication, he mentored many young men and women in McAllen Memorial’s JROTC Program. He guided student cadets with a servant leadership style.

Moore served two tours of duty in the Vietnam War where he was twice decorated for meritorious service.  He was a member of the American Legion, Veterans of Foreign Wars, Vietnam Veterans of America, Disabled American Veterans and a contributing writer to the Marine Corps Association.

His is a legacy of leadership, honor, integrity, commitment, loyalty and, above all,  service.