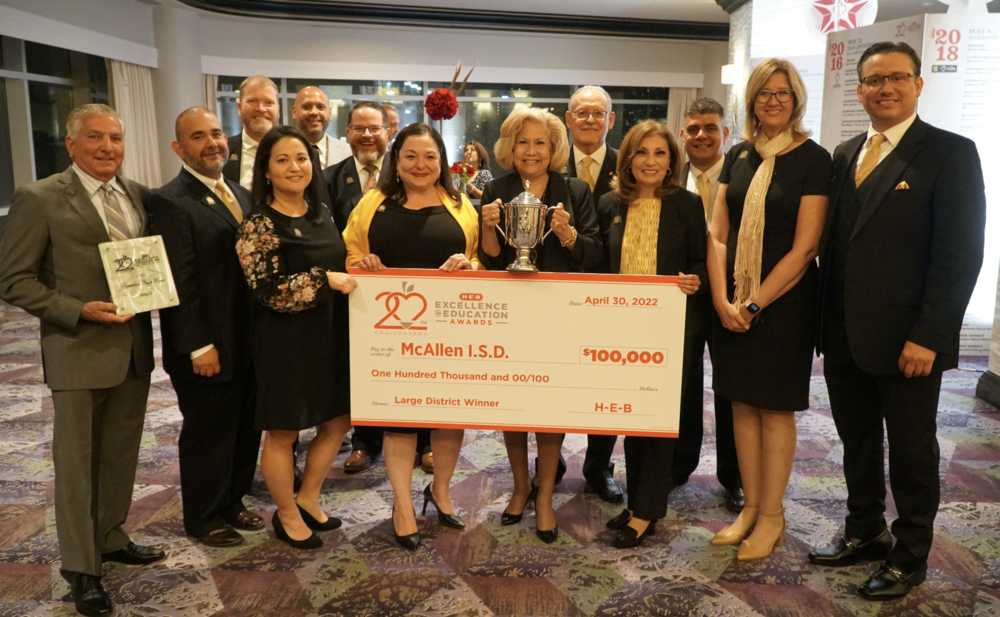 McAllen ISD now stands alone at the top after being named the best in Texas, it was announced Saturday night.

The district was named the Best Large District in Texas at the 20th annual H-E-B Excellence in Education awards in Austin.

See story from The Monitor: https://myrgv.com/local-news/2...

McAllen ISD had a rich representation at Saturday’s awards. The district became a finalist this spring for Best Large District, School Board Leadership and the Rising Star-Elementary category (McAuliffe Elementary teacher Mayela Canales).

“We are entrepreneurs of the human spirit,” McAllen ISD Superintendent Dr. J.A. Gonzalez said on behalf of the district. He also thanked H-E-B for its support of public education and fellow educators in the room who had come from all corners of the state.

H-E-B awarded $430,000 Saturday to all winners and finalists. In the 20-year history of the event, H-E-B has awarded more than $12 million to public schools.

McAllen ISD is the only school district in the Rio Grande Valley to have become a finalist in the Best District and School Board Leadership sections.

Eight school districts and five early childhood facilities were selected as finalists for the retailer’s Excellence in Education Awards program. H-E-B also recognized five public school boards to highlight the importance of strong leadership at the board level.

Since the program’s inception, H-E-B has awarded more than $12 million in funding to benefit outstanding Texas public schools. This year, H-E-B will award a total of $82,500 to the finalists and school boards, who will go on to compete for even greater cash prizes at the statewide level.

To determine overall statewide winners, a panel of judges visits each district, early childhood facility and school board, tours campuses and talks with administration, staff, parents, and community members.

H-E-B launched the Excellence in Education Awards program in cooperation with the Texas Association of School Administrators in 2002 as a positive way to support public education in Texas. It has become the largest monetary program for educators in the state, spotlighting best practices and celebrating the passion and creativity of Texas educators.

H-E-B asks customers, Partners (employees) and community members to nominate teachers, principals, districts, early childhood facilities and school boards in Texas. Each nominee is sent an invitation to complete an application online and is asked about their professional experiences, educational philosophies, and achievements both in and out of the classroom.

A team of judges reviews the applications, narrowing the field to semi-finalists. From that pool, five regional judging panels make the winning selections.

Eight winners — two principals and six teachers —were announced along with two school districts, one large and one small, a public school board and an early childhood facility, at a celebratory dinner held in Austin.

About H-E-B
H-E-B, with sales of $32 billion, operates more than 420 stores in Texas and Mexico. Known for its innovation and community service, H-E-B celebrates its 116th anniversary this year. Recognized for its fresh food, quality products, convenient services, and a commitment to environmental responsibility and sustainability, H-E-B strives to provide the best customer experience and lowest prices. Based in San Antonio, H-E-B employs more than 137,000 Partners in Texas and Mexico and serves millions of customers in more than 300 communities. For more information, visit HEB.com and the H-E-B Newsroom.